What happens when you rewrite an old book? – “Kalahari” morphs into “Ukuthula!”

James Michener was once asked why he didn’t rewrite and expand his first book, “Caravans,” after he had established himself as one of the world’s renowned authors.  He essentially answered the question by pointing out that the process of writing is creative. The creation is, what it is, and if you go back in and try to completely rewrite it you come out with a new creation, a new thing and new book.

I realized years ago that my first book,” Kalahari” Had a number of plot and character flaws which one of my original reviewers said were “unworkable and un fixable.” End of story! The book came out in 1995 after I had attempted to fix some of those flaws, but it was never the book I had hoped it would be,  Begun  in 1978 as the novel, “Maru a Pula”, a story of the liberation of Zimbabwe /Rhodesia based on my knowledge an experience in Southern Africa in the 1970’s, I was unable to publish it and in the 1980’s and early 90’s it morphed, with the liberation movement in South African into “Kalahari,”  a story set during the early 90’s.  The book had moderate success until the publisher went belly up and the rights were returned to me by the bankruptcy court a number of years later.

So let’s analyze a few things.  Here’s what Maun Botswana looks like in late 1973 after no rain for three years.. 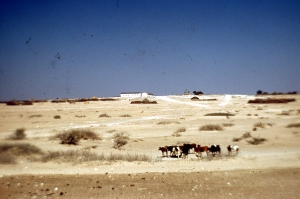 Here is Maun again  in early 1974 after the rains brought water. BIg difference, Eh? You bet!

Yes, Kind of like pictures #1 and 2, no water in the Thamalakane River, Water holes in the desert that the cattle and animals had scraped out over ten feet deep. Picture # 3 and 4, the river was 100 yards wide and full of bream, crocodiles, hippo …  Absolutely amazing!  So this is the picture in my mind when I completed Kalahari and it was published in 1995.

Now, let’s look below at Maun Botswana in 2014. 40 years later!  Wow!  Shopping malls, automobiles, paved streets, tin roofs, cell phones. …on and on.  The big Thamalakane River is still there and it’s still fairly wild, but people don’t drink out of it directly, or bath in it every day or wash their clothes in it because water is now available through out the town. This is the kind of change that has taken place in the country. So you can imagine how the rewriting of “Kalahari” resulted in a completely different book because my perspective now looking at liberation as a fact that has happened since the mid 90’s, rather than as a dream, for which we were struggling,  in the 70’s – early 90’s.

What’s different about the new book, “Ukuthula?” 1. The Plot is unified, coherent and linear (except for back flashes).2. The conversations have changed completely, 3. The descriptions of scenes have changed , 4. New characters with new names have appeared and the female roles have grown markedly, 5. Chapters which were meaningless have been deleted and new expanding chapters added, 6. the number of pages in the book has expanded from 222 to over 400 pages.

What’s the same? 1. The theme of the struggle for African liberation is still there. 2. The idea of odd bedfellows in wars of liberation remains. 3. The conflict between good and evil remains. 4. The idea that eventually good shall triumph over evil remains. 5. And a bunch of the good old fashioned action scenes have stayed in the book and been expanded and built upon.

I could go on, for hours, but let’s just say, when you pick up “Ukuthula” and read it you will not recognize more than a few minor items within the book that are left over from “Kalahari.” Is that good? Of course! You didn’t want to read another copy of some old book. You wanted Africa like it was and still is, the smells, the adventure, the action, violence and love in a better and different format.  And that’s what you will be getting in only a few months from now when the book goes on sale in both paper and electronic formats.  A new book morphed out of old ideas, bigger and better.

Now I know why James Michener didn’t go back and re-write “Caravans.” It would never have been the same.

3 Comments on “What happens when you rewrite an old book? – “Kalahari” morphs into “Ukuthula!””