That’s Richard Headley Clow in the header picture. At 17 years of age he enlisted in the Union Army to fight at Petersburg and the final battles of the Civil War.  Stationed at Fort Hayes outside of Petersburg,  Richard Clow was in the first troops to enter Petersburg when it finally fell.  The fortitself is long gone, but a few ramparts remain under the blackberries.

Named After General Alexander Hays, nicknamed “Fighting Ellick” was killed on May 5, 1864 in the Wilderness  so the fort was named after his demise.

Built with a central pit and sites for 2 cannon, the fort was a part of the long North-South line that kept the Confederate troops from receiving any support by sea. Thus when the railway was finally cut, they were doomed and had to retreat from Petersburg towards Appomattox.

At the front of the fort would have been a pit to prevent troops from crossing without being exposed to cannon and musket fire.

If you were a Confederate approaching Fort Hays it would have looked much like this! Note that cannon muzzle between the sandbags. 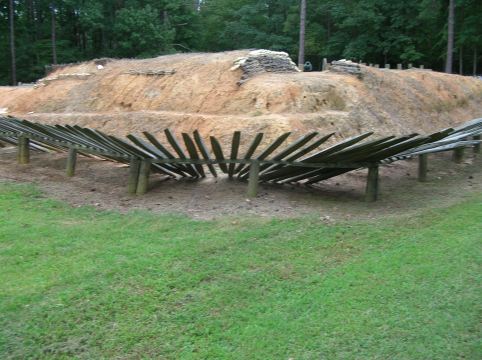 If you were with the Union Troops, your view would have been much like this. With a clear swath of killing ground in front of the fort. Remeber that most of the trees were long gone al around Petersburg by the beginning of 1865 due to cutting for firewood, blasting to clear ground and constant cannonades.

“Rough Enough” traces Richard Clow’s life journey to the battlefield, letters to his sisters from Petersburg and then following the war traces his journey west to Montana in 1867 to build forts and fight in the Indian War against the Sioux and Cheyenne at Fort Shaw, Camp Cook, and Fort Buford.  His emplyment by the frontier sutler, Charles Larpenter, and life with that family are covered in some aspects of his diary which continues onto Deadwood, South Dakota and the gold rush in 1876-77 where he struck it rich.

← Read about a Black African Hero! – Ghosts of Ukuthula – Last Day of 2018 giveaway
Book Review: Leopard at the Door, by Jennifer McVeigh →