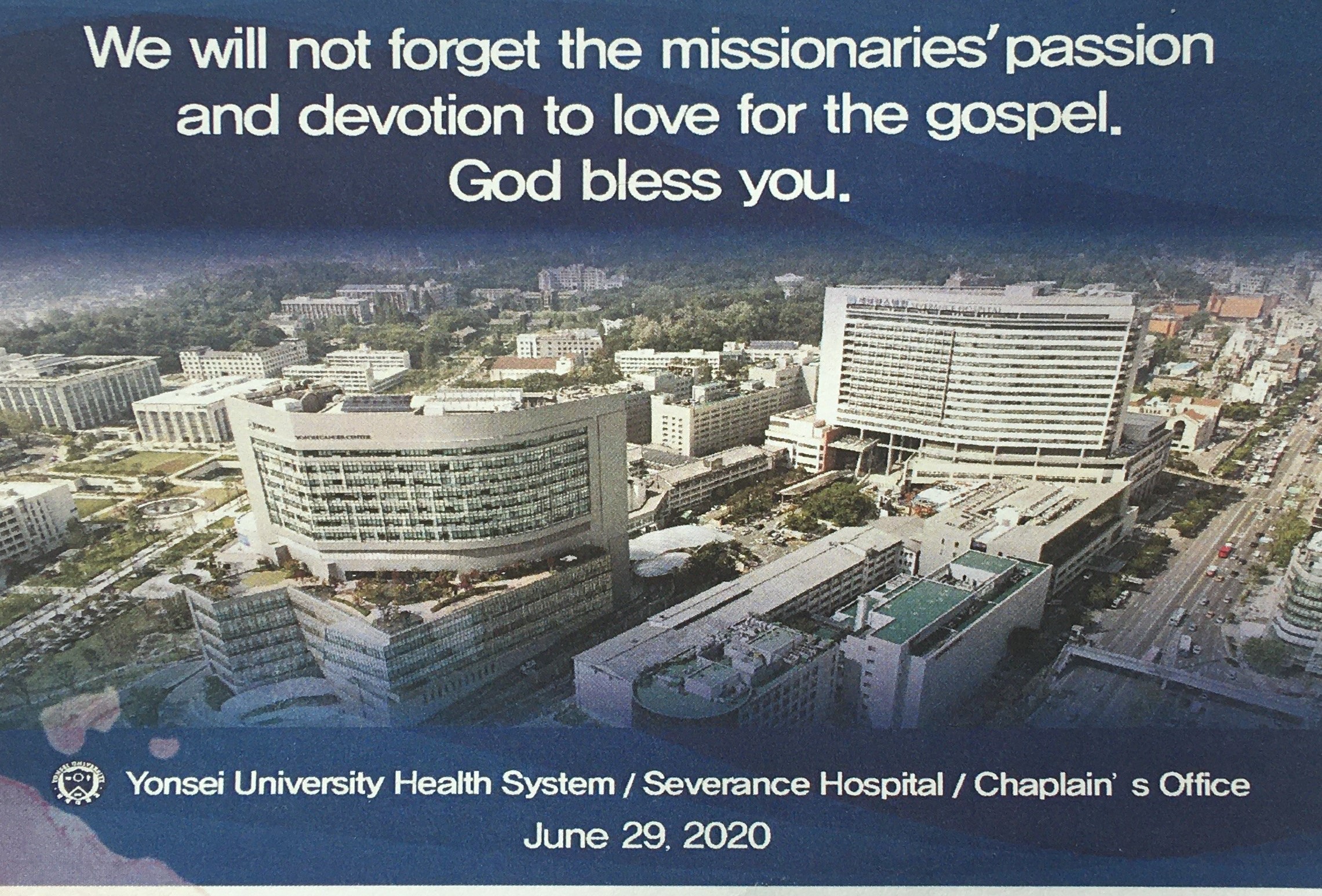 The good that goes around comes around!

As former developmental missionaries for the United Methodist Church in Africa in the 1970’s, my wife and I were amazed to get a package the other day with 20 of these Masks! WOW!

I looked up the masks on line: These masks, https://kmact.com/products/dr-puri-kf94-mask-for-adult?variant=32055327785045 are sold in English labelled packets of 20 for $46.00, the Dr. Puri KF-94 Masks are some of the very top level masks! These ones came direct through the Board of Global Ministries from Korea!

Inside the package was this note:

So my little brain says:

Why is Yonsei University Health System sending these? Thank-you Internet, I was able to look things up on Wiki and other sites to find out!

Before 1885, there was no practice of Western medicine in the country of Korea and no training facility. Then in 1885, a Missionary spark from the North Presbyterian Church brought this development to life in that country!

Now called Yonsei University Medical School, in Gwanghyewon, South Korea, the school dates back to April 10, 1885 when it was founded by protestant missionary Horace Newton Allen, a developmental missionary from the North Presbyterian Church. Full management of the University, initially called Chejungwon, was transferred to the North American Presbyterian Church in 1894 and the Severance Union Medical College and Hospital was opened by Dr. O. R. Avison in April of 1899. June, 1908 saw the first seven graduates receive the very first doctor’s licenses issued by the Korean government.

Today! Yonsei University is one of the 3 most presigious universities in the country along with Seoul National University and Korea University. All are of world renown in science.

South Korea stood out by flattening the epidemic curve: a. without closing businessed! b. issuing strict stay-at-home orders c. having a strictness of grouping size orders and compliance by the population that was much stronger than in other high income countries.

So! Because of 1. Fast Government Action, 2. Lots of Testing,3. A well functioning National Health System and 4. Ample human resources and 5. Strong support from the national government including: The Office of the President, The Ministry of Health, and the Korean Centers for Disease Control and Prevention, South Korea became a model for other countries around the world.

WHAT A MISSION PROJECT!

CHRISTIANITY IN ACTION! TO AMERICA!

From a country a fraction of the size and wealth of ours!

DON’T YOU WISH OUR COUNTRY COULD BE LEADER IN WORLD MISSIONS FOR HEALTH AT THIS TIME OF GLOBAL CRISIS?

Our leaders of the wealthiest nation on earth who profess Christianity but do not act only to Store up Wealth here on Earth should be ashamed.

IT is EASIER for a CAMEL to fit through the EYE of a NEEDLE than for a rich man to enter HEAVEN!

← Book Review – Wolf Pack by C. J. Box
Just Shuckin’ the corn in Oregon with a WARNING for your Dog! →