Tour Fort Hayes near Petersburg. VA – Well Worth the Visit – Needs some TLC !

I shot these pictures while doing my research for the book:  “Rough Enough”  describing Richard Clow’s time in Civil War along with his letters and diary from this period and the frontier. 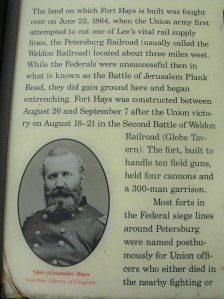 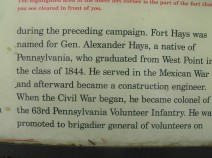 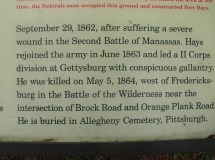 These are about the best shots I could get of the site where old Fort Hays used to be outside of Petersburg. Other areas surrounding it have been renovated but in most cases all you can see are  blackberries, brush and a few of the mounds left from the original bunkers and trenches. Not particularly inspiring right now!

The small panel near the road shows the bunkers and magazine but not a lot of information. There is one 1885 battle shown in the area on the plaques showing a part of the attempted breakout by Lee and the thrust going past Fort Hayes on March 25, 1865.  This is very likely the battle Richard describe to his sister in the letter of April 1, 1865 where he was caught behind the lines as the others retreated. 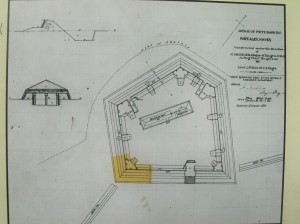 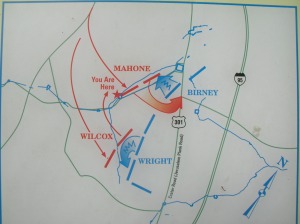 Leaving the fortifications and  bushwhacking through the overgrown temperate forest jungle, while watching out for nettles, you can finally get through to see the cotton fields and beyond the hills of Petersburg.  In the distance beyond the trees are towers showing the position where  Mahone’s troops would have been before they made their push to the East and Fort Hayes.

It was a great  piece of history to go back to  and see when researching Richard Clow’s perspective of the war.  Much of the rest of the Petersburg battlefield area has been well maintained both to the N. East and S. West of here. Perhaps this is part of private land still and the owner doesn’t plow it under, but doesn’t maintain it either.  It would be interesting to know some more about this particular piece of the battlefield. My week long visit to the whole battlefield area only scratched the surface of this great national monument. Well worth the visit!