Thinking back to some of the reasons why Richard Clow may have enlisted in the 56th Mass. Infantry in 1865, one of the items he notes in his February letter to his sister is that the 56th was “cut up badly” and needed replacements. For us, perhaps not a really good reason to join the Infantry rather than the Engineers, but perhaps some of this interest came from back in July 1864 when the battle of the Crater took place.  Richard Slotkin’s well written thorough history of this battle should be read by all who are interested in visiting the Petersburg National Battlefield.  The site itself is well described and frankly very interesting to walk through and to contemplate what each side must have been doing to either make itself vulnerable to attack in this situation, or to deceive the others so that they would not notice what was going on so near to their lines.

Let’s look at what happened on the ground.  A number of units and officers knew about the work on the mine by the Pennsylvania troops including Col. Weld of the 56th Mass. Here are his words from a battlefield visual. 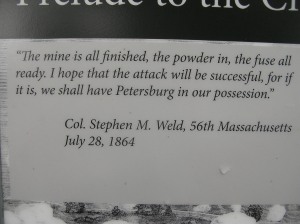 And of course Major General Burnside who had allowed the project to proceed knew about it. The initial doubt about the whole scheme changed to one of optimism as the realization came of what a complete breach of the Confederate lines would do to the possible end of the war.

The ventilation shaft which allowed clean oxygenated air to enter the lengthy tunnel and keep the miners with fresh air was a masterpiece of ingenuity.  Working in the same manner as the draft for a home stove, The fire burning outside the tunnel actually pulled it’s air from deep within the diggings, thus setting up a constant flow of air into the mouth of the tunnel and keeping the miners alive. 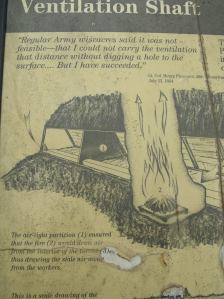 The views from the actual front lines of the Union and Confederate troops makes one realize how hard it was to keep this project a secret for the weeks of digging and hauling bits of dirt out and disposing of that without becoming obvious.;  From the Union side the mouth of the tunnel was obvious (picture on left).  Looking up the hill towards the Confederate lines,(picture on the right)  it would appear that one might easily see what was going on as the slope doesn’t look to be very steep or cut with gullies. 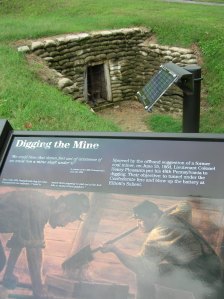 But,  from the Confederate lines, the hump in the hill (picture below) shows how that bump made the tunnel mouth more obscure and any man peeking over the top would obviously have his head exposed to the rifle and musket fire of the Union Picket line just below.  Thus the deception was possible.

In the final analysis, the battle was not lost because of a fault in the plan for digging the tunnel and placing the gunpowder, nor was it the fault of a delayed explosion.  In fact, the defeat came because of two flaws in the command of the Union troops.

Note the assault picture below:  The explosion blew a massive hole and stunned the Confederate troops so badly that had the Union troops gone around the Crater rather than through it, their success would have been ensured. Additionally, if there had been no infighting between all of the commanders to prevail on Maj. Gen. Burnside that he should not allow the trained and drilled Black troopers to lead the assault, then those men who had practiced and thought about the assault would again have likely won the day. As it was, the lust for glory by the commanders put untrained unprepared troops in the first assault wave. They became bogged down in the mud and uneven ground of the crater and ended up being slaughtered. 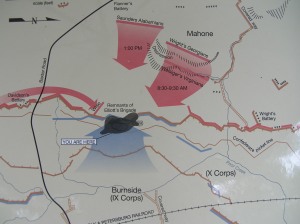 In our final picture of the Crater we see not only the hole, but most likely a Union Soldier’s skull still in the hole being viewed by tourists after the war in 1867. A tribute to excellent planning and innovative ideas, but a monument to failure due to human inability to cooperate and give glory to others when it was both deserved and planned for. Visit the area, enjoy! 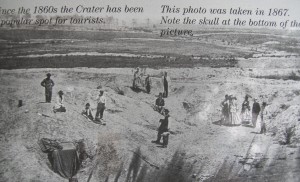