It starts when I pick up on old book formerly owned by Thomas Littlehales, lately of Forest Grove Oregon (passed away circa 1945) my great grandfather on my mother’s side.  He owned two copies of Thomas Ingoldsby’s “The Ingoldsby Legends” or “Mirth and Marvels.” See Modern Copy

Mine is a bit older – 1869! And a bit more used: Note The signature of Thomas Ingoldsby on the right hand side of the page about halfway down. See enlargement

Wow! Oops! Ingoldsby was really Richard Harris Barnham a parish priest in England in the 1800’s who firtpublished these tales in 1840 undeer his pen name.  See more on the book!

But it was what was inserted in the middle of  the book on two brown, tattered and torn pieces of paper wrapped in plastic cling film that really threw me! What appeared to be the signature of another Thomas, Thomas Jefferson.

Was it true? This is a blown up scan of some of the flowery writing off the pages!

Ok, so what to do? First I go on the internet to see if there is a copy of 3rd President of the USA and an author of the Declaration of Independence. What does his signature look like? Here’s What Google Comes up with – Check it out. I go to The RAAB collection of Thomas Jefferson’s signatures in case the one on the Declation of Independence is just a fluke or a scribble after  long day at the office.  RAAB signature collection

Looks like this probably isn’t one of his signatures, but could it be from a relative?  So I go back and scan and blow up some more writing on the other side of one of the pages where it looks like an address?  Ahah! Will it be Jefferson’s home and someone is writing to him? Another example: 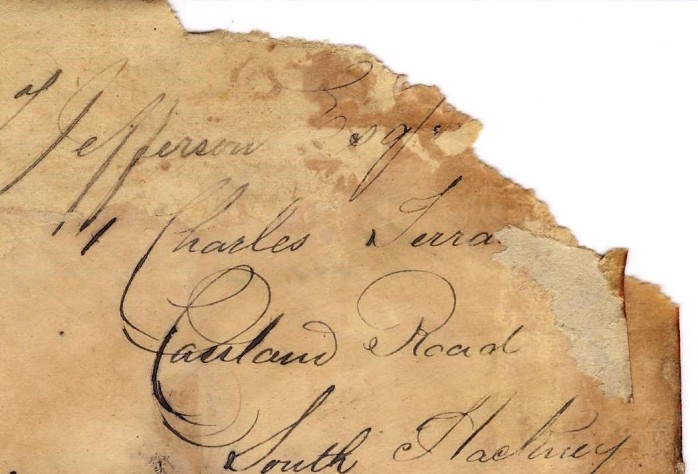 Hmm! Not our Guy – South Hackney is in England. And here’s another signature to confirm.  And it has grafitti on it.

Whoever “My Dearest gal, Aunt Dolly,” is, we’ll probably never know, nor the artist. Finally I come up with the whole name of our unknown Thomas with this last clip:

Apparently a present given on New Year’s day (what year we can only surmise being somewhere around 1869-70. And the full name is Apparently:  Thomas Howard Jefferson of Charles Terrace, Cassland Road, South Hackney, probably in England.

So much for my hoping I had a $10,000.00 signature of Thomas Jefferson, the president. Also unfortunately this copy of the 2nd Edition is in poor shape so not worth the $12,000.00 seen on the internet for sale: Buy a first and second edition What amazing penmanship people had in those days! Better Luck next time.

← Into the Inferno – a novel by Earl Emerson
Voices from Vietnam by Barry Denenberg: Book review →