Book Review: The Code Breaker – Jennifer Doudna, Gene Editing, and the future of the Human Race by Walter Isaacson 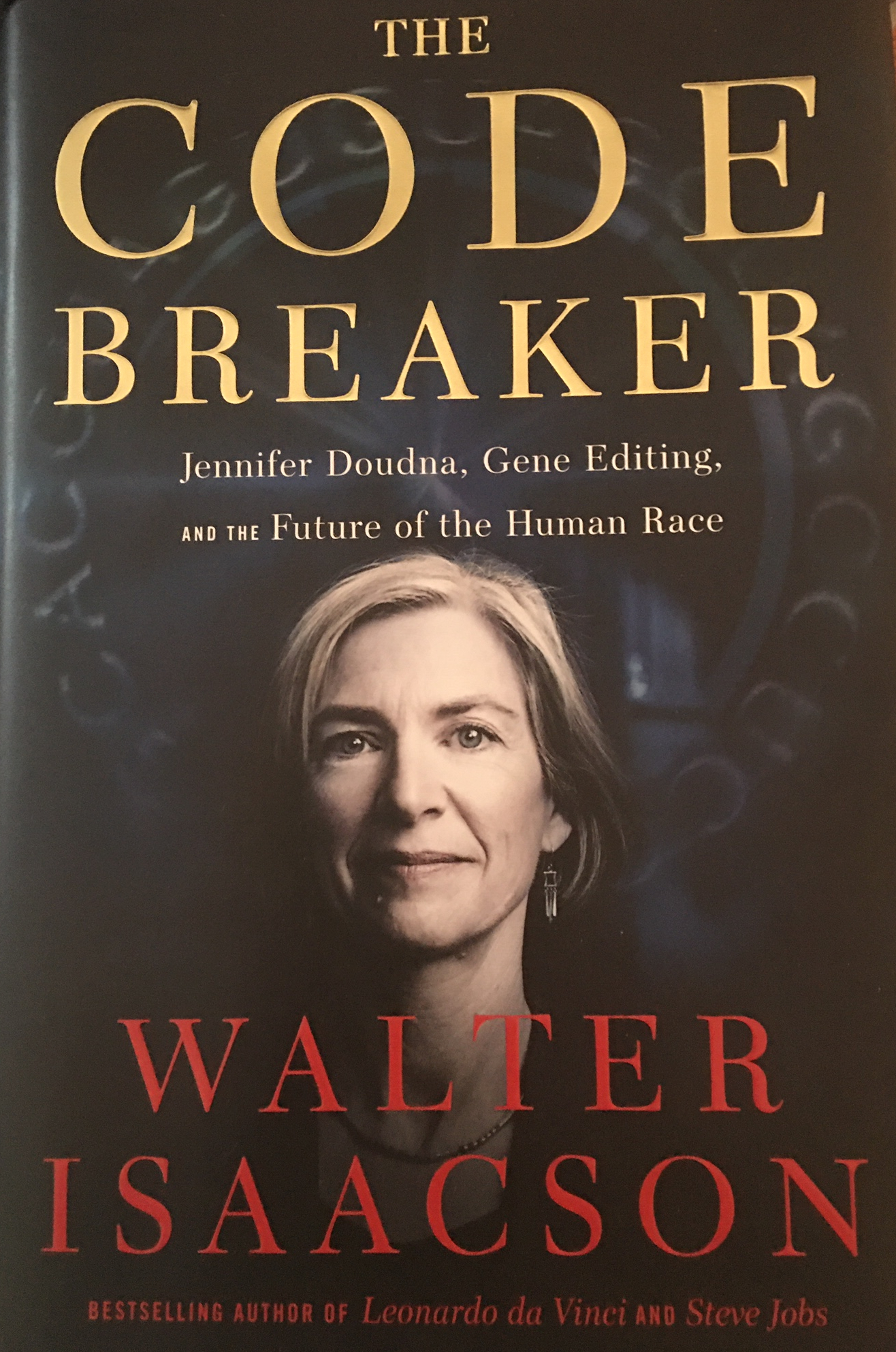 Here is a book that tells the complete story of genetic editing from the biochemistry laboratory of Rosalind Franklin, in the 50’s to Jennifer Doudna’s 2020 lab and the development of COVID-19 vaccines.

Franklin’s groundbreaking X-ray diffraction photography in the early 1950’s gave Watson and Crick the key to the structure of the DNA molecule which sets up the life story of Jennifer Doudna’s research.

The book chases both the quest for the sequencing of full genetic codes and what they do in humans and other organisms. The real story begins in the 1980’s in Japan where PhD microbiology graduate student Yoshizumi Ishino noted five homologous sequences of 29 nucleotides arranged in repeating sequence in the genome of the bacterium E. coli. In the 1990’s, a Spanish microbiology PhD graduate student, Francisco Mojica, figured out the function of these repeating sequences by first noting that they were palindromes, readable the same way in both directions and named them Clustered Regularly Interspaced Short Palindromic Repeats from which the acronym CRISPR was devised.

At the same time, the book is following the early life, professional career and thinking development of the key player in this whole book, Dr. Jennifer Doudna, who in 2020 was awarded the Nobel Prize, in Chemistry along with her good friend and colleague Emmanuelle Charpentier for their discovery and description of how Mojica’s CRISPR mechanism worked to fight off viral infections in bacteria and how the process could be harnessed to edit the genome of nucleated cells.

Alongside of this fascinating scientific story are the human-interest stories of numerous highly ambitious individuals and groups of scientists who cooperate and compete for being the first publishers of groundbreaking knowledge about the workings of CRISPR. In the life story of the main protagonist, Dr. Jennifer Doudna, we see the development of her passion for discovery and organization as she follows a dream, born from the discoveries of the 1950’s to the present and is able to organize teams of graduate students and other scientists to work on the whole discovery process of making CRISPR work outside of cells in a test tube, and then work in nucleated mammalian cells. We read the life stories of many of these other equally passionate scientists, whose experiments and collaboration in sharing worldwide scientific knowledge over a period of seventy years made it possible to develop a process of gene editing that could only have been possible in the imaginations of sci-fi writers half a century earlier.

Withing the entire process of discovery, author Walter Isaacson makes us aware of the doubts, ambitions and behind-the-scenes petty gamesmanship that can develop in a world in which the simple date of publication of a document may mean the difference between a multi-million-dollar patent, or a spin-off company, or a Nobel Prize for persons who make the next key breakthrough in biochemical or biological knowledge.

The story and interviews also remind us of how the spiral of human knowledge and innovation cannot occur without the possibility of that knowledge being misused by persons who are willing to break rules which have been set up to protect us from malicious tampering with the human genome in certain ways.

The author brings to light, with his massive number of interviews, the doubts, fears, transgressions, penalties and the need for rules to govern our new genetic tools. The moral and ethical dilemmas we may face in these new waters of genetic engineering will certainly be equal to some of the quandaries faced by the developers of the first atomic bombs.

The book begins with researchers studying the three-billion-year battle between invasive viruses and bacteria with their CRISPR defenses. It ends with the viruses still waging their invasive warfare against true nucleated mammalian and other cells, but with the hope that humanity can somehow repurpose ancient bacterial tricks to counterattack viruses and certain genetic diseases in order to better the lives of all persons in the future.